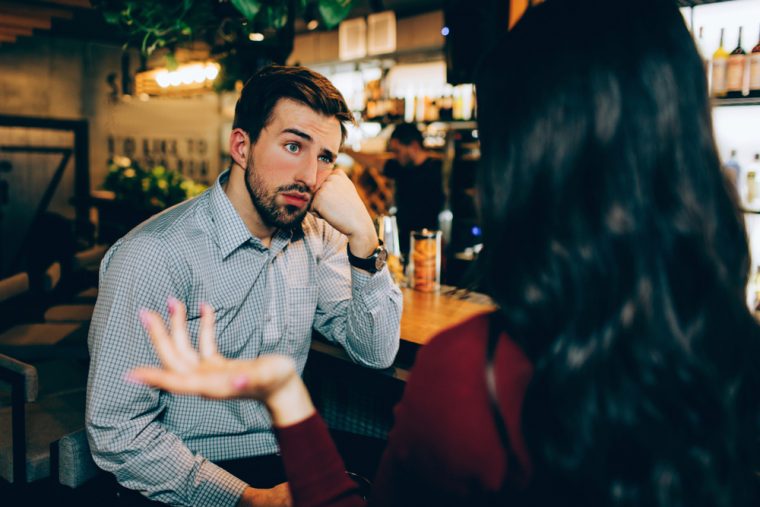 How can you tell if a Cancer man is into you or just being nice? He’s pretty easy to read if you pay attention. There are things to look for that will help you figure out his intention. Keep checking out the article below for signs a Cancer man is not interested.

If a Cancer man isn’t interested in anything more than being friends, he will be very nice, flirty, and seem as though he might be into you but then he won’t ever follow through.

He’ll suggest getting together to hang out because maybe he does want to but only as a friend or only for a hook up. Then he’ll flake out or he’ll never go ahead and ask you out.

He won’t text you or he’ll be very short with his responses to your texts. He looks flaky and confusing but this is his way of letting you know that he’s just not feeling it.

If you find that he’s making conversation by talking about cool places to go or fun things to do, he may just be making small talk or trying not to be rude. Of course if he asks you to do something sometime then flakes out, that’s a good sign he’s likely not into it.

He’s pretty good at hiding out or pulling back into his shell when he knows a lady is interested in him but he isn’t into her or is already involved with someone else. That’s another common problem.

You may find out this guy has a girlfriend and he’s just a really flirty guy. He flirted with you but he didn’t mean anything by it. You hear by word of mouth he’s taken and it’s frustrating. Watch for inconsistencies and red flags.

Is He Just Considerate or Does He Like You?

Cancer man is a very nice guy and very sought after for advice. Women know he’s good to go to in order to get some much needed introspection about whatever they are going through.

Unfortunately many women take his niceness to mean that he’s interested in more. Much of the time he’s not. He’s just doing what comes naturally and the woman misunderstands his intent.

Before you assume that he likes you and wants to go out with you, you need to ask yourself what occurred with you two. Was he helping you with something? Is he a co-worker that is just super nice to talk to?

Look at the situation rationally instead of listening to your hormones who want to jump his sexy body. Women get turned on by men who are helpful and exceedingly nice. It doesn’t mean he likes you though.

If you’re in the position where he’s been nice to you and maybe has suggested hanging out, it may just mean he’s being pleasant or that he wants to be friends. Cancer man typically does have female friends because he understands women.

Remember, Cancer men have a flirty demeanor and even if they have a wife or girlfriend, they still tend to be this way. They won’t tell you any different unless you push the line too far then they have to.

Otherwise, they will make it seem like they’re this awesome guy who wants to get together but come to find out, he is either just in it for a hook up or he’s just being flirty and not interested in a relationship.

It may seem like he’s leading you on but he’s not doing it on purpose. He really is a nice guy and sometimes he’s just perceived in the wrong way because he doesn’t want to hurt you or make you feel bad.

When a Cancer man gets together with you to spend time and doesn’t take you anywhere or introduce you to anyone, you’re just a friend. He may be trying to just get into your pants or see how far you’ll allow him to go.

Cancer men do often have friends with benefits and will reserve his full commitment for the woman thinks is “the one”. If he’s not taking you out to meet his friends, family, or co-workers. He’s not into you.

This level of secrecy is because he isn’t willing to have anything more with you than he has or is trying to have. It may mean friendship only or a sexual tryst depending on what you let him do.

Don’t ever think for one second that if you have sex with him, it will make him want to be more with you than just a friend. That isn’t how he operates. If he cares for you and wants to be with you, he will not keep you a secret.

He also will not sex you up first and then try to form a relationship. Normally it’s the other way around. Don’t fool yourself. If he’s not willing to give you a relationship with all the trimmings then he’s not with you.

Keeping you a secret to anyone means you’re not his girlfriend and not likely to become his girlfriend either. He’s good at keeping secrets also when he’s actually married or already in a relationship. Beware ladies!

Never There For You

Cancer men love to lend a hand to those who need help. However, if you find that though he’s helped you once or twice, he’s starting to flake out; he’s making it clear to you that he’s done.

A Cancer man who is not there for you isn’t with you and doesn’t intend to ever be with you. Cut your losses and find someone else who will be there for you because he’s not likely to change his tune.

That being said, you are now armed with some very definitive signs that should help you determine if your Cancer guy is not interested so you can move on and find someone who is.

If you still need some tips on your special Cancer guy, click here and find more signs a Cancer man is not interested and how to make him interested.

7 Questions That Make a Cancer Man Fall in Love

How to Attract a Cancer Man in July 2020

Cancer Man and Libra Woman Break Up – How It Will Go?

Cancer Man Scorpio Woman Break up – How It Will Go?

Cancer Man and Scorpio Woman Problems: How It Will Go?

How to Attract a Cancer Man in June 2020

When a Cancer Man Wants You: Use These 5 Classy Tricks

​​Now is the time to take 3-minute Quiz and discover your chances with your Cancer man: