October 3rd, 2022
Why does the delicious Cancer man seem to be hot one minute and then next thing you know; he’s cold or quiet. Find out why is Cancer man hot and cold. 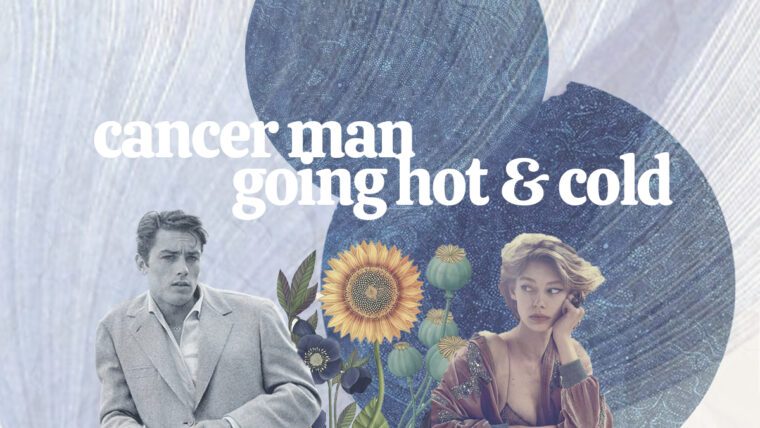 Is your Cancer man hot and cold and you have no idea what to do about it? You might wonder, are Cancer men players? These are just some of the questions I often get from my clients when dealing with a Cancer man.

These guys are extremely complex in that their nature is extremely sensitive, emotional, and moody. It can be quite difficult to understand where these guys are coming from.

They can be so confusing that you might even think that there is something wrong with you. But never take what a Cancer man does personally, it is usually his own stuff he is carrying around.

This is a subject I can talk about for hours and hours, so if you want to dive deeper and find out more about why is a Cancer man hot and cold, then keep on reading.

6 Reasons Why a Cancer Man Goes Hot and Cold

Cancer men are VERY flirtatious. They are notorious for getting many women interested in him as he’s charming, sexy, and knows what to say to get attention. This is natural sex appeal.

He’s already good-looking so this draws a woman in but then he starts laying on the “nice” comments and making himself seem like he’s interested. This can at times; be a game he is playing.

Sorry to say but; Cancer men are game players that can manage to hurt women unintentionally. He normally wouldn’t try to hurt anyone. However; he doesn’t understand that when he is “too nice”; he leads women on.

He doesn’t get it when a woman becomes very upset with him for not having followed through with all the flirting he was doing with her. He thinks maybe she shouldn’t have bought too much into it.

The thing is; she might not have been that into him if he hadn’t laid that charm on in a thick layer. He needs to learn to be more conscious of leading women on when his general intention isn’t as such.

When he’s into a woman though; he’ll lay it on that much thicker. He’ll go all out to make the woman feel as though she’s the only one in his world. However if she sees how he talks to other women; she’ll question his honesty.

Read also: What Happens When You Ignore a Cancer Man

Taking into consideration how moody and up and down Cancer men can be, it is quite possible that the thought of a Cancer man being a player has crossed your mind.

It is easy to see why when he is acting quite inconsistently at times. But truth be told, it is very rare for a Cancer man to be a player. He is someone who wants to settle down with just one person. He is looking for his soulmate.

This man really wants commitment and to grow old with someone who he loves. When a Cancer man meets the right woman, he is all in and will give her everything she could ever desire.

He is definitely not a player, don’t you worry!

How To Handle A Cancer Man Going Hot And Cold? 3 Ways To Do It

It can be heartbreaking when you have fallen for a Cancer man and he has suddenly gone cold. You might not know what to do about it and this can be really frustrating and heartbreaking.

I have some useful guidelines you can follow on how to handle a Cancer man going hot and cold with you.

There are some pretty clear signs when a Cancer man is in love with or, or if he only wants to be your friend. Sometimes a Cancer man will pull away when he has strong feelings for a woman. It might confuse you at first, but he is a lot easier to read than he might think. Don’t let him play you into believing that he isn’t interested in you.

My suggestion with a Cancer man is to always try to take it slow with him. Make him work for it because remember you are worth a lot more than you can imagine, so stick it out and see if HE is actually worth your time.

Show him your generous nature and how amazing you really are and that you aren’t going to leave him. That’s all that’s really required here. Soon he’ll realize that he doesn’t need to test you to gain your affection. Be your normal self and show him who you are on the inside. He wants a woman who is everything.

By everything I mean empathetic, sweet, caring, and secure. He wants someone he can trust to always be honest with him and yet someone who knows how to speak to his heart.

When he doesn’t speak up, respond quickly enough, or seem to disappear for a day or two, be patient. Don’t think the worst. Just send a text that lets him know you’re thinking of him and he should come running! If he tends to ignore your texts, learn about the number one reason a Cancer man avoids your texts.