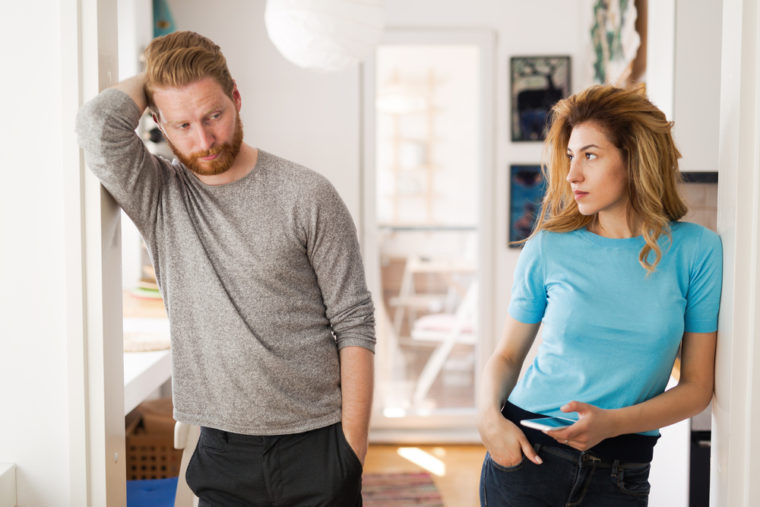 You’ve experience the icy energy from your Cancer guy but not sure why he would be so distant. Why is he so closed off and unable to talk to you? Keep reading for some useful information on what happens regarding the Cancer man acting distant.

Isn’t Sure How You Feel

Cancer men are sensitive and sometimes pick up on things that others do not. They also look for signs of love and if they aren’t feeling as though their partner loves them anymore, they’ll start to pull themselves back into their shell.

This would particularly be from a partner who has become comfortable and doesn’t work as hard to win his heart anymore. It makes him feel as though his partner has lost their desire for him.

Feeling low, the Cancer man decides that his partner just doesn’t care anymore or is actually unclear about how his partner feels. If you have a Cancer man who has seemingly pulled back, you may want to talk to him about it.

If he expresses that he doesn’t know how you feel or that he feels you don’t care for him like you once did, you had better find a way to let him know where you are in his heart so he doesn’t pull further away.

Sometimes his pulling back can lead him to roads he wouldn’t otherwise be travelling while in a partnership. This could include looking for love from other women or even cheating.

He wants to always feel needed, desired, and sought after. If you aren’t making him feel this way then he’s going to feel insecure and low. He will then get quiet and you’ll feel the icy energy he gives off.

Naturally if a Cancer man for some reason feels that things are not working out the way he had hoped, he will back up or back out. This causes him to stop talking and communicating.

When you notice him pulling back even just a little bit, you had better talk to him to find out why he’s doing this. You might be able to salvage it if it’s a problem that just needs a solution.

Sometimes Cancer men assume that you know how he feels or what he wants. If you don’t react the way he wanted you to, he figures that you just don’t care so he should move on.

Be very careful with your Cancer man’s heart. He needs to always feel the light of your love because the second he starts to question it or feel maybe he’s not in love anymore, he’s going to fade out until he’s gone.

Naturally when a Cancer man wants out of a relationship, he will absolutely start to slowly withdraw. He’s not forthcoming in telling a woman he doesn’t want to be with her anymore.

He’d rather her figure it out or break-up with him so that he’s not the bad guy. This typically results in women feeling betrayed, hurt, and displaced with the Cancer man. Again, it’s best to ask him if you suspect something is wrong.

There are times where a Cancer man will fall in love very quickly and then once he gets to really know his partner, he figures out that it’s not what he thought and he’ll try to figure out a way to exit the situation.

The Cancer man actually would benefit greatly from taking his time deciding if someone is right for him. He doesn’t always have the patience and thus rushes then becomes paralyzed with fear.

Cancer men do tend to have abandonment issues and due to this, their fears are massive when it comes to committing to a woman if they’ve been hurt before. This is why they’re hot and heavy in the beginning and then fizzle out.

It may not be because he wants out but it could mean he realizes he was going too fast and needs to slow back down. This slow down is still something that should be discussed so that the relationship doesn’t die out.

It’s always a good idea to talk to your Cancer guy to make sure that things are alright, he’s happy, and he wants to continue building something with you. When you ask him, he should be honest but sometimes he’s scared to tell the truth.

Be understanding of him and realize that he’s terrified. When he’s terrified you will have to prove yourself with lots of time and patience. Breaking down his walls may not be easy but should be worth it.

He’s only scared of commitment when he’s been really badly burned before. He has to learn the hard way though otherwise he’ll keep rushing in and finding failure over and over.

In the event that you aren’t giving him all the attention he really craves, he’s going to lose interest in you. He wants to be in love and feel all the things that come along with that.

Be playful, be attentive, be sexy, and let him know how much you care. If you don’t, you will lose him. He’s not really one to wait on someone who is unsure. He wants someone who knows fairly quickly if they want a future with him or not.

While you can suggest taking it easy in the beginning, he won’t have the patience to wait too long for you to come around. Either you’re in or you’re out. That’s the way he sees it.

Give him attention and appreciation or find someone else. He certainly has no trouble moving on and finding someone else who will give him all that he could ever desire. Don’t be replaceable!

If you’re ready to understand why is Cancer man acting distant, and what can you do to prevent it click here to learn more about Cancer Man Secrets.

2 thoughts on “Cancer Man Acting Distant – These Are Possible Reasons”