August 6th, 2020
Being married or engaged to a sensitive, caring Cancer Man can be utter bliss! Here’s what you need to know!

Being married to a sensitive, caring Cancer Man can be utter bliss! This is one Zodiac sign that just gets it right — but he will have his moments! Moody and emotional, the Cancer man goes through phases, and it can be a rollercoaster being married to him! Here’s what you need to know!

In Astrology, the sensitive water sign Cancer is represented by the crab. Crabs have their shells to protect them for the harsh world outside, and when attacked, they can use their pincers to defend themselves.

Being married to a Cancer guy can be the most rewarding—and the most challenging—experience. Cancer men can sometimes give a girl whiplash!

This man is born to love, nurture, and take care of you and everyone else in their world. Yet at the same time, Cancer men may neglect to ask for that care themselves and may withdraw into one their famous sulks.

My clients who are most successful in their relationships with Cancer men are the women who can stand strong and not be ruffled by their man’s moods!

One thing you need to know, however, is that Cancer men are typically devoted for life. No matter how many changes they go through, they married you because they saw you as their forever person. They’ll always be your greatest fan and most loyal protector, no matter how tough life gets!

Here are seven things you need to know about being married to this loving, caring and vulnerable sign:

1. He Loves You Wholeheartedly

Cancer men truly love with their entire heart and soul. They may cling onto the past, holding their exes secretly in their hearts forever, but that doesn’t mean that he doesn’t adore you to the moon and back!

It just means that everyone he’s ever loved holds a special place in his tender heart.

These men will devote themselves to the business of commitment. They’ll value your family, no matter how frustrating they are, and they’ll always be there to pick you up when you fall. They will worry about you constantly and always look after you.

A Cancer man doesn’t marry if he doesn’t mean to be the very best husband that he possibly can. He knows and accepts the responsibilities of a long-term relationship.

If there are ever moments that you doubt him, when he’s cold, or going through a tough phase, rest assured that even if he’s under pressure, he very seldom is thinking of leaving you and will almost never fall out of love with you.

2. He Will Have His Moods 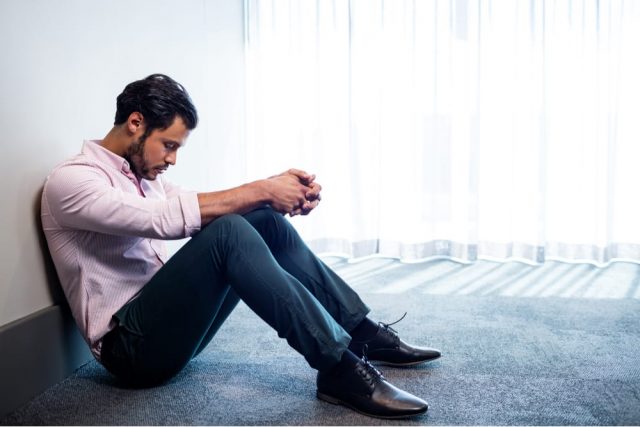 Here’s the truth about Cancer men: they are moody. Even for an emotional woman, Cancerian moods can be a lot to deal with.

One moment they’re sparklingly happy, dancing in the living room, and the next, they’re devastated about losing a favourite photo of their mother.

You’ll have to roll with the punches.

When he’s crabby and grumpy, let him be. Do not confront him or force him to open up — just be there for him and let him know you’re there to support him. When he’s happy, celebrate with him! Just accept whatever he’s feeling. This will help him to be more comfortable with his sensitivity, too.

3. He Can’t Deal With Confrontation

You know how crabs scuttle to the side when they’re facing an attack? If you’ve ever seen two crabs go at each other, they never go head-on. They threaten each other, but they seldom actually attack.

Similarly, your Cancer man hates confrontation. He can be a bit passive-aggressive, in other words. If he’s upset, he usually sulks and becomes moody, but he won’t confront you.

If you confront him, he’ll sidestep you and try to avoid the whole thing completely. Don’t push him too hard. Rather, find less aggressive ways to deal with issues, and encourage him to let you know how he’s feeling when he’s ready.

Cancer is the sign of the Mother. Male or female, these people live to care for other living beings, be they furry or human!

Your Cancer guy is likely desperate to be a dad (biologically or otherwise) or even just to have pets. Yet, they won’t rush into it anytime soon, because they know how deeply they’ll devote themselves to parenting.

He’ll be the one in the relationship that is likely to have very little sense of discipline, and it may be that you have to be the stern one!

When they become a father, their lives re-orient themselves completely. Work and career may become secondary as a means of providing rather than being center of their universe.

Isn’t that something wonderful to look forward to?

5. He Will Need Space

As much as the Cancer man adores being around you, and can even be rather clingy, he does need space for himself.

The ideal would be for you to both create a physical space where he can withdraw into his crabby shell to process his feelings—an office or a “man cave,” for example. When he’s in there, make sure he knows you’re around, but give him that breathing room he needs.

Once he’s had a moment to catch his breath and feel less overwhelmed, he will emerge as a better husband and partner. It’s a win-win situation!

6. Family Is Everything to Him – Especially His Mother

This is especially true for the relationship with his mother. Cancer men usually put their moms on a pedestal and will go out of their way to do things for them. You will have to learn to share the throne with her, and if you go against her for any reason, expect backlash.

Even if you feel that she’s got a hold on him, it’s useless to try and come between their bond. They may both regard it as absolutely sacred!

Never force a Cancer man to choose between you and his mother—you might not be happy with his choice.

Read next: 7 Things To Know When Dating a Divorced Cancer Man

Even if you may not always see it, Cancer men tend to hold onto the past, old hurts, and resentment.

This can be a little frustrating when you need to move on, but just give him time to process things. This is especially true if he’s had emotional wounds in his childhood.

You can gently encourage him to start letting go, but never force him. He’ll move on when he’s ready.

Your Cancer man can be confusing, but now that you have Astrology on your side, you’re that much more equipped to enjoy your marriage to its absolute fullest!

Are you married or engaged to a Cancer man? What have you noticed about being his committed partner? I’d love to hear your story in the comments! Everything you share is anonymous.

If you’d like to know more about the Cancer man, check out Cancer Man Secrets: