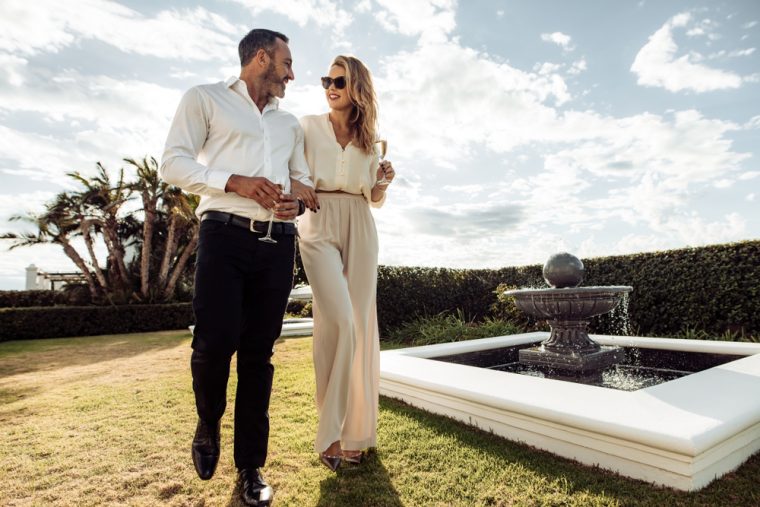 What can you do to get that sexy Cancer man to pay attention to you and maybe date you? It’s easier than you think! Cancer men are attracted to women who look and act a certain way. Keep reading for super tips on how to impress a Cancer man.

Look and Wear Your Best Duds

One of the first things that get a Cancer man’s attention is beauty, sex appeal, and sense of fashion. If you enjoy wearing the latest fashions and making sure your hair and makeup matches, you’ll do quite well.

He prefers women who are very feminine. This means wearing skirts, dresses, and anything that shows off her legs as well as bosom. He’s attracted to classically sexy women who aren’t afraid to flaunt it.

High heels will definitely get him looking. The way it makes your leg shape, it turns him on. Of course if you’re not afraid to wear thigh highs then you’ll definitely gain his attention.

This man loves thigh high stockings. Either you can wear a short skirt revealing them or you can wear a long skirt with a high slit in the side that reveals just the top of one of the thigh highs so he can fantasize.

When wearing a sexy blouse or top, you want to reveal cleavage but not in a way that it looks like you’re about go to hit the pole at the local strip club. Make it sexy but not too revealing. Leave something to the imagination.

After you secure him, you can probably dress trashy for him around the house and he’ll love it. He just would prefer you not flaunt it too much when out and about. Then again, some will want you to because it lets them show you off.

Again, to initially attract the Cancer man, you want to look on point with your clothes, hair, and makeup. You want to look like a runway model that just came from a photo shoot.

Flattery Will Get You Everywhere

Cancer men love to be flattered. They love it when women flirt with them and compliment them on their work or style. Anything you can find to compliment him on, do it. He’ll eat out of the palm of your hand.

He’ll be giddy like a school boy once you show up looking like a million bucks but making him feel as though he’s a man. This is exactly what he wants from a woman. Whoever pays him the most attention is the one who will win him over.

Give him all your attention and affection and you’ll stand a very high chance at landing the Cancer man’s attention and future adoration. Be sure to look for anything you can give his ego a lift with. You won’t regret it.

Appealing to His Family Desires

The Cancer man is the guy that wants to form a family. Even if he already has a kid or two, he’s going to want to find a wife and possibly have another child, two, or three. He really loves family and will do anything to have it.

He will want a woman who is ready to mate or become a mother to his already existing offspring if he has any. He’s looking for a partner, a wife, and a mother to his children (now and future).

That being said, when you get the chance to talk to him, you want him to know that you’re also looking to find the right person to settle down with and make a family. This will let him know you’re looking for the same thing.

Tell him how much you love kids and how much you love doing family activities. This will appeal to him and make him wonder if you’re the right woman for him. It may lead him to want to spend more time with you.

Let him now that you are the family woman type and you should be able to further get his attentions. He wants to know whether or not you’re someone he can have a future with or not.

Believe In Him and Support Him

A Cancer man wants a woman who will listen to his dreams and aspirations and want to inspire him rather than tell him his head is in the clouds. Even if it seems impossible, he wants to hear encouragement.

When you’re first talking to him and want to get to know him more. Listen to him, absorb what he tells you, and be positive about what he tells you. Be enthusiastic and tell him how awesome his ideas are.

You can even suggest things that may help him get to where he wants to be. That would be positive reinforcement that would definitely turn his attention to you. He wants his partner to also be his best friend.

Showing him you have the capability to be his best friend as well as future lover will make him really think about you. In fact, I wouldn’t be surprised if he gets your number and starts calling you more.

Be Spontaneous and Go With the Flow

Cancer man’s moods swing back and forth. If you’re trying to win him over so that you can build a bond with him, you’re going to have to understand that his moods aren’t stable all the time.

He may be happy go lucky one day and then be quite irritated the next day. As long as you understand his sensitivities and how it effect his mood then you’ll understand it has everything to do with his intuition and empathy.

He isn’t doing this for no reason. He’s a very sensitive person who tends to pick up on other people’s energy. He’s also the “go to” person for advice and help. He’s someone who loves helping folks.

This is where it’s important to show him support and that you care about his well being. Once you do that, you’ll win his affections. You can totally do this if you follow these steps!

If you want to better understand how to impress a Cancer man, and to know everything about him, click here.

Would You like to Calculate Your Chances with Mr. Cancer?

Now is the time to take 3-minute Quiz and discover your chances with your Cancer man: