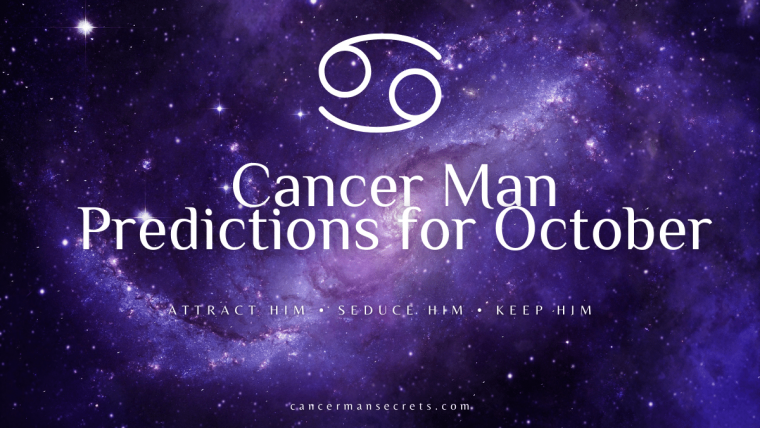 Hello, lovely readers, how’s life going? Changeable and full of excitement I hope, but today, take a breather and sit down to relax with the October predictions for the Cancer man. Let’s go!

The first week of October offers a look into the inner workings of a Cancer man’s mind and his deepest emotions. This is a perfect opportunity to get all of your burning questions answered by probing and delving deeper into his psyche and his dreams…

The second week of October brings forth some shocking (social) events for the crab-man, and news that might make him question the loyalties of the closest people around him. Now is a great time for you to shine and show your worth by being a voice of reason and calmness for him.

The third week plays no games – it’s a great week to get to know his background and his family, as well as to pay extra attention to him and his needs. Going out for a family dinner or for a brunch with his parents might seem like a very good idea, that’s because it is – take it! Kayaking and biking can also be great for his soul right now, so don’t forget about activities like that either.

The final week of October holds a special place for the Cancer man in its bosom. The New Moon Eclipse in Scorpio falls into his fifth house of pleasure, fun, and kids, and this New Moon will bring a great time for new beginnings, loves, romances, and hobbies he can share with his kids or with himself.

The Beginning Of A Hibernation Period

During the first week of October, the Cancer man will be focused on intimacy questions and his partner’s money. It’s an excellent opportunity to dive into your emotional wounds and more profound matters concerning the heart with your Cancer man.

As the week progresses, it’ll be a good time to discuss your travel plans and greater philosophies of life. It’s also a good time to start asking questions about his home plans and perhaps changing-the-address plans.

If you have the mind to make something more permanent in your relationship, now is an excellent time to plant the seeds of that idea in his mind, and let it grow and flourish on its own until the ripe time comes.

This first week is a great time to have cozy and intimate dates, exchange deep and sappy messages, and show each other emotional and philosophical support. If you feel the need to vent about something in your personal or professional life, now is a great time to receive pretty good advice from him.

Let’s Get This Party Started

When the second week of October comes, the Cancer man will have to bring some things to a close where his public and professional life is concerned. And it won’t be diplomatic nor easy, as the Full Moon takes place in feisty Aries.

He is forced to take a closer look at his previous decisions that were made when he was in a mood larger-than-life, and he will have to rectify some of the mistakes he’ll feel are not his fault. Because of this, the Cancer man’s mood will be sour and it’ll be your time to play devil’s advocate and lend a supporting ear to his troubles.

After the Full Moon has passed, he will regroup and gather his strength through social events and his friends. Alas, all is not over, for he might hear or discover a startling truth or news about one of his friends that will leave his mood further shaken.

This is why it’s a great time to act as a stabilizing influence in your Cancer man’s life, and take on the role of someone who can calm him down in his fits of emotional outbursts and anger. It’s a perfect time to become involved and engaged in his social life and to be there as an objective force that will drive him toward more logical and rational decisions.

Read also: How to get a Cancer Man To Commit To You

A Profound Week, No Doubt

The third week of October puts the Cancer man in a calmer and more introverted mood, so he will be prone to shutting in and having an inner counsel about his emotions. Now is a good time to let him be and let him retreat for the time being.

When the third week goes further along, he will start opening up and coming out of his shell more. Now is a perfect time to ask him out on a fun date, and elevate his spirits by doing something that makes him the center of attention, and makes him feel good.

Cooking for him or asking him out on a kayaking or biking adventure might be very good for his soul and his mind at this point in time.

He is also concerned about home stuff, his family might weigh heavy on his mind right now, but he also might find out some good news from his father or mother. Adversely, he might ask you to go out for lunch with his father, or for you to finally meet his parents.

Looking ahead, this is a good week for your relationship development, and you might catch a glimpse at his upbringing and you can experience an “aha” moment that will tell you more about his current state of mind and the subconscious programs he’s been enacting with those around him.

The Mighty Scorpio In All Its Glory!

The Cancer man will have the best receptivity for this New Moon and this transit, all in all. This activates his house of pleasure and fun, and he will have a blast when it comes to romance.

If he has kids, this will be a great time for him to start something new with them, become a part of their hobby, and let himself integrate (smoothly) into their scene and their social lives.

It’s a great time for all kinds of new beginnings, especially those that include love, romance, and vitality. It’s a great time to start a new hobby for himself as well, especially one that he can later turn into a proper business. What a way to end the month, quite awesome for the Cancer man!

There you go, my lovelies, quite a month for the Cancer man. He will have an uplifted mood at the start and the end of the month, and what comes in between is his own affair.

He won’t be very needy this month, except post-Full Moon week, and even then, he’ll be a joy to be around.

October will treat the Cancer man much kinder than some other Zodiac signs, and this New Moon Eclipse in Scorpio will turn out to be the best deal in the history of deals ever for him, and only him!

I recently wrote an article about a Cancer man’s texting style. You might want to give it a look before November approaches, it’ll help you ease through the challenging periods or misunderstandings. Trust me on this one.

All the love and happiness in the world.