November 30th, 2022
Monthly December predictions for your Cancer man. Check out the final monthly predictions of 2022! How is December going to treat him? 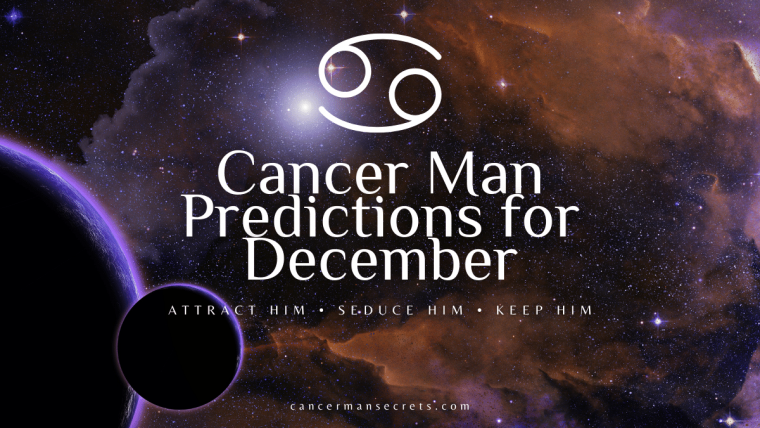 Hello, my darlings, how are you? I hope you’re enjoying this Sagittarius season at least a little bit. I know the cold weather and the winter mood in general can be a bit dreary at times… Hang in there, it’s almost the New Year, and then just a couple of more months until spring!

As well, I have the Cancer man’s predictions here, so let’s dive in and see what awaits him in the coldest month of the year…

The beginning of the month activates his field of habits and daily obligations; since it’s Sagittarius season, the Cancer man is being pushed to be more athletic and aware of his body. He’s prone to hibernation during these months, and that’s the opposite of what he needs to do in order to remain in optimal health right now… You might want to help him out with some steamy incentives.

The second week will either be all fun and games, or it will be a lesson that smacks him on the head because he wasn’t listening when he was supposed to. This is a good time for light and humorous flirting, dirty jokes, and verbal seduction. Go and play some games with him, seduce him with your tongue and eyes.

With Mercury and Venus moving to Capricorn during this week, the Cancer man will look for Saturnian qualities in his lover or partner. This is why you need to put your money where your mouth is and make good on all of your (dirtiest) promises. Make his head spin by doing exactly what you said you’ll do!

The final week of December is a very special time – a perfect moment to say your last goodbyes to 2022 and prepare for 2023 stronger than ever! This New Moon is being overlooked by Saturn, and all you want to do is grow, but you’re also prepared to invest some serious time and work. You will surely be blessed and successful in the months to come, so rejoice!

At the start of the month, the Cancer man’s focus will be on his health and his social life. He will be asked to be more athletic, put more work into the body’s movement, and with that – how his mind works.

It’s very important for a healthy brain to retain not just a healthy or optimal diet, but also to move one’s body, keep it in touch with the grounding energies, as well as stimulating muscle mass. That is the key to longevity, prolonged youth, and optimal health nowadays.

At the same time, his focus is on the sudden movements in his social area of life. The Moon’s transit is activating the North Node – Uranus Retrograde chassis, and that is making his social life area light up like a Christmas tree, no pun intended.

He is also quite tense, on a subconscious level, as Mars Retrograde keeps wading through the murky waters of his mind. All of this makes for a good time for the athletic type of dates and romantic activities. Go out and make some trouble, have sex in a public place, race each other on the beach, go jogging together, or start going to the same gym.

Flirt in front of other people, try and hide your steamy passion from the watchful eyes, sexual tension is in the mind of the players – so go out and play that hot and steamy game. What’s stopping you?

On the 8th, at the very beginning of the second week of December, there’s a Full Moon in Gemini, the Cancer man’s twelfth house of phobias, fears, and dreams. And what’s more, this Full Moon activates Mars Retrograde which is currently opposing the Sun in Sagittarius.

If there was a health issue he’s been stubbornly ignoring – it’ll culminate now. If he’s been hardworking when it comes to his daily habits and health, he’s in the clear, and this transit makes for a good sleepless night because he is going to be doing something else, something much more fun than sleep.

This is a great time for naughty flirting, verbal and witty seductions, and making innuendos in public in order to tickle his imagination for the private time you two are about to share.

Playing light verbal games, being charming and a bit childish might be a very strong aphrodisiac during this time, and it might stimulate him to pursue you even more. Using your wits and dirty talk could very well be the strongest weapons of seduction you show off from your arsenal at this point in time. Good luck!

The third week activates the Cancer man’s love field – Mercury and Venus transit into the Saturnian realm (Capricorn) and the game just got serious. He’s had enough of light foreplay and fun innuendos, now he needs a serious approach and commitment.

He’s also going to be quite stubborn during this week, thanks to Mars Retrograde and Aries degree in his twelfth house, and his tongue might be sharper than you’re used to since the Moon is going through nitpicky Virgo.

This is a good time to take your flirting game to the next level and back up your Sagittarius claims with some solid Capricornian actions. It’s time to put your money where your mouth is, and I don’t mean that just metaphorically… If some (dirty) promises were made in the previous weeks – now is the time to make good on them.

Don’t back up now, the Cancer man is a Cardinal boy, he likes to see bravery, strong-headedness, and determination in his partners, and now is the perfect time for you to shine. Show off just how much you’re serious about him, and just how much you really want him. You have my blessing, so go for it!

The final week of December really puts oil to the fire on his seventh house – there’s a Super New Moon in Capricorn on the 23rd, and this will either make or break the relationship you’ve been building thus far.

A whammy of five planets makes a mighty stellium in Capricorn during this week, and that includes his ruler – the Moon – as well! What a time to be alive, huh? So, my advice is to go hard or go home when this transit hits.

Now is the time to back out of a relationship with your Cancer guy if you’re unsure that this is (exactly) what you wanted. If you’re down for getting dirty and serious, then this transit will be on your side.

It’s a perfect time to plan for the future together, stick with each other (through thick and thin), and if you’re in that stage of your love life, for getting engaged or even married. It’s a perfect moment to move in together, buy a home, or even better – build one together.

This transit has the possibility to take your relationship to a whole new (and deeper) level if you’re both into it. This New Moon, blessed by stern Saturn, will support and fortify your wishes and goals, as long as you’re willing to pull your sleeves up and do the hard work – you’ll be amply rewarded. Just hang in there.

The Cancer man will be in a predominantly good mood during this month, as long as he’s taken the health precautions and hasn’t hit hibernation as heavy as he’s used to around this time of the year.

Be playful, flirty, and charming during the first two weeks of December, but when the third week comes, make your preparation for taking your love game to the next level.

During the fourth week, you’ll have a unique opportunity to make your love life long-lasting, deeper, and more serious; that is if you’re willing to work for it and put in, as they say, the long hours.

I sometimes hear from readers that while these Horoscopes are helpful for their romantic lives, they crave more detail and more specificity for them. This is totally understandable, and I have figured out a way to make sure you get all the information that you need to take advantage of transits and to know what pitfalls to avoid.

I’ve created a spot here where you and I can talk personally about your own concerns and how to best create the relationship that you have been waiting for. I love talking to my readers and getting to know them as people – and truly, what have you got to lose? Connect with me here.

Wishing you love and light on your journey.

P.S. I just released the 110-page Cancer Man Secrets for 2023! It’s the most complex digital yearly forecast I ever did for Cancer men. You might want to check it out!